The life cycle of the Olympia oyster, Ostrea lurida 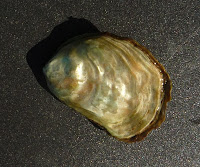 Coos Bay is home to two different species of oysters: Crassostrea gigas, a large species (typically up to 20 cm in shell height) which is native to Japan but reared commercially all over the world, and Ostrea lurida, a much smaller species (up to 6 cm in shell height), which is the only oyster native to the west coast of the United States (pictured here).  Both oysters are sequential hermaphrodites, although they differ in the regularity and seasonality of their sex changes. C. gigas is a broadcast spawner whose eggs are fertilized externally, while functionally-female O. lurida adults filter sperm from the water column and fertilize their eggs internally. While C. gigas larvae develop entirely in the plankton, O. lurida larvae are brooded in the adult’s mantle cavity until they reach an early veliger stage (which takes roughly ten days) and are then released into the plankton (Strathmann et al. 1987, and references therein). 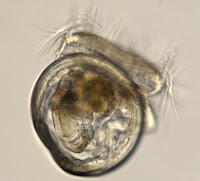 Larvae at this stage are known as D-stage veligers because their flat-hinged shells look like a capital letter D.  In this picture the larva has extended its velum, the ciliated structure used for swimming and feeding. A green algal cell is visible in the larval gut. O. lurida veligers swim and feed in the plankton for a period ranging from one week to one month, depending largely on temperature. As the larva grows, it loses its resemblance to a capital D because the umbo becomes more prominent and triangular. The larva eventually develops an eyespot and is considered competent to settle and metamorphose when its shell measures about 0.3 mm.

O. lurida were harvested for a burgeoning West Coast market beginning in the late 19th century, but commercial stocks were depleted by the early 20th century.  Habitat degradation and, in some cases, predation by introduced species and disease further contributed to the decline of this estuarine species (Polson et al. 2009). Many estuarine scientists are interested in restoring the species along the West Coast, as oyster beds provide habitat for a variety of other species and help stabilize the estuarine shoreline (e.g. Jackson et al. 2001, Ruesink et al. 2005).

Strathmann, M.F., Kabat, A.R. and O’Foighil, D. 1987. Phylum Mollusca, Class Bivalvia. In Reproduction and Development of Marine Invertebrates of the Northern Pacific Coast: Data and Methods for the Study of Eggs, Embryos, and Larvae. Strathmann, M.  F. University of Washington Press. Seattle and London.
Posted by Rose Rimler at 1:18 PM