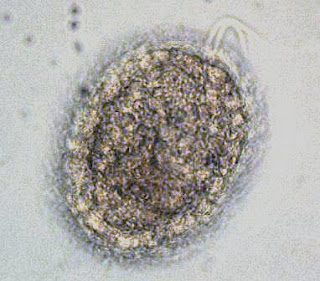 In the first of week of January I found egg strings of the nemertean worm Carcinonemertes errans in among the egg mass of a Dungeness crab (Cancer magister). These worms feed on the crabs eggs, acting like parasitic castrators to their hosts. The embryos within the worm egg strings began to hatch out after I agitated them a bit with my forceps.

The larvae that emerged were planuliform uniformly ciliated "blobs" as Svetlana calls them, only about 100 microns long. They contained lipid droplets and two eye spots. Each larva had cirri at both their posterior and anterior ends. These cirri, together with the cilia covering the body, were used for locomotion, helping the larvae swim in a distinctly zig-zag pattern. 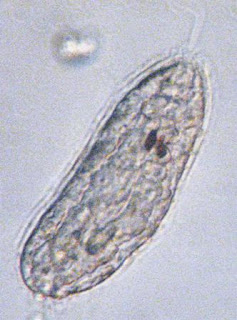 I kept the larvae in large glass containers, changing the water every two days. By the time the larvae were three weeks old they had begun elongating and looking a lot more like young worms. The rudiments of many juvenile structures are present within the larvae, including the proboscis.

To date, I have several cultures of C. errans larvae, the oldest of which are nearly 50 days old. They have not begun to settle out yet, nor have they developed much further, which leads me to think that they might have a rather long planktonic life span or need more specific food and/or settlement cues that I have not yet exposed them to. I'll just have to keep trying new things. Isn't science great? 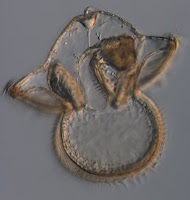 On February 11, 2010 Marley Jarvis, a PhD student in Alan Shanks' lab at the OIMB, did a surface plankton tow off the F dock in the Charleston marina (Charleston, OR). She timed the tow to sample at high tide and used a 153 micron plankton net. She caught a lot of interesting animals, including several kinds of nemertean larvae. One of the most common morphotypes of nemertean larvae was a pilidium larva, which we named Pilidium megacephala because it has relatively large cephalic imaginal discs. Likely, this larva belongs to the genus Micrura. We are currently working to get the DNA sequence from it, to try to identify which species it belongs to. 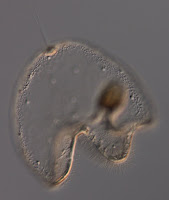 Another kind of nemertean larva Marley found was also a pilidium, but of a different sort. Its morphology suggests that it belongs to the palaeonemertean genus Hubrechtella, or one of its relatives in the family Hubrechtiidae. It is characterized by relatively small lateral lappets displaced toward the posterior, a large anterior lobe, very large and conspicuous squamous epithelial cells with prominent nuclei, and lack of a muscle retractor, which in other pilidium larvae connects the apical organ to the esophagus. Our pilidium resembles the type of larva called Pilidium auriculatum described by Leuckart and Pagenstecker (1858) from the European waters. A similar pilidium from Swedish waters was identified as belonging to Hubrechtella dubia by Cantell (1969). Pilidium auriculatum type of larva had also been found in the Gulf of Mexico (George von Dassow, pers. comm.), in the Gulf Stream off the Atlantic Coast of Florida (Norenburg and Stricker, 2002) and in the Sea of Japan (Chernyshev, 2001). So far no hubrechtid nemerteans are known to occur on the West Coast of North America.

Marley Jarvis did a plankton tow at the F dock last week, and among the contents were many chaetognath embryos, almost certainly Sagitta elegans (because adults of these are common here, and a few small ones were in the same plankton sample). A couple were just finishing gastrulation. I made a time-lapse film of one of them overnight, and it so happened that it was a transverse view at about the middle of the embryo. This means that the formation of coeloms, as pouches that are pinched off of the archenteron, is easily visible in this movie.
At the beginning of the movie, the archenteron has folded all the way in. Primordial germ cells (four of them) emerge from the roof of the archenteron while the blastopore closes. The embryo begins to elongate along the anterior-posterior axis (not visible yet) as folds grow down from the roof of the archenteron. These drag the primordial germ cells with them. The coelomic compartments are the dorso-lateral chambers thus carved out by ingression of these folds. I am not clear on what becomes of the actual archenteron, because it's not visible in this film, and in embryos after this stage, the apparent archenteron is quite small. It may form by re-opening the space between the two ingressing folds.
Posted by gvondassow at 3:41 PM No comments: