Bryozoa is a phylum of miniature, sessile, colonial invertebrates characterized by a crown of tentacles called the lophophore that facilitates ciliated filter feeding. You can see several individual zooids with extended lophophores in the picture below. Most bryozoans brood their embryos, but where and how they brood varies. 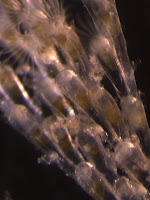 Bugula pacifica, a cheilostome commonly known as the spiral bryozoan, broods one embryo at a time inside shallow ovicells; specialized calcified brood chambers visible here as semi-circular structures attached to maternal zooids. The ovicell is produced jointly by the two neighboring zooids - the maternal zooid and the next distal zooid (Giese et al. 1947). 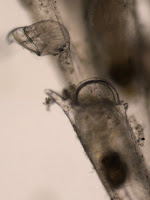 This is a close up view of a maternal zooid and an ovicell in Bugula pacifica. What looks like the head of a bird above the ovicell is a specialized zooid for defense called an avicularium. Ovicell and avicularium morphology vary within the genus, and can be used to key out species. B. pacifica has reduced ovicells, so reduced that a well developed embryo cannot be contained and bulges into the maternal zooid (Giese et al. 1947). Developing embryos in Bugula apparently receive extraembryonic nutrition from the maternal zooid (Giese et al. 1947). Ovicells of cheilostome bryozoans vary in morphology and development which suggests that they may have evolved independently many times in this group (Giese et al. 1947). 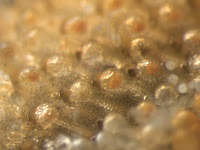 Schizoporella japonica pictured here, is another cheilostome bryozoan. It is often found encrusting mussel shells and other substrata in NE Pacific marinas. The ovicells are visible as small bumps on the surface of the colony, some with embryos (an orange mass inside) and some empty. S. japonica’s ovicells aren’t as intimate with the maternal zooids as in Bugula, and the embryos develop without the aid of extra-embryonic nutrition (Strathmann et al. 1987).  See a blog post by Dylan Cottrell about brooding of multiple genetically identical embryos (polyembryony) inside gonozooids in Crisia sp., a local stenolaemate.

Megumi F. Strathmann 1987. Chapter 3: Bryzoa. In: Reproduction and Development of Marine Invertebrates of the Northern Pacific Coast. University of Washington Press. Pp. 116-158
Posted by Anders B. Hansen at 1:14 PM