Planktonic larvae of the polychaetes Nephtys and Capitella

I collected the two polychaete larvae pictured here from a plankton sample taken off a dock in Charleston, OR on May 8, 2013. The thing that caught my eye was the deep blue color in the lining of the gut of the larva shown immediately below. 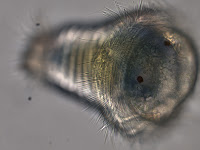 This blue pigmentation along with a dome shaped episphere, a pair of eyes, and two transverse ciliary bands (anterior prototroch and posterior telotroch) separated by 10 body segments suggests that this larva (called metatrochophore) belongs to a polychaete from the family Nephtyidae, likely the genus Nephtys. Twelve species of nephtyids are reported from the NE Pacific, but the larval development has been described only for one of them, Nephtys caeca (Crumrine 2001). 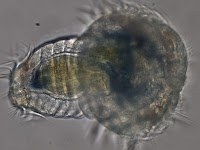 Jay Bowles, a student in the Molecular Marine Biology class at the OIMB,  matched a similar-looking larva to the genus Nephtys using DNA sequence data (see blog post Confirmed identity of wild-caught planktonic larvae by Terra Hiebert). Nephtys larvae like this one are planktotrophic, their gut has a spacious lumen, and one can sometimes see diatoms and other food particles inside (S. A. Maslakova, pers. comm.).

The morphology of this other larva suggests that it belongs to the polychaete family Capitellidae, likely the genus Capitella. There are eight species of capitellids in the NE Pacific, but the development is described only for two of them. Although this larva fits the brief description of larval Capitella capitata in Crumrine (2001), it may also belong to another capitellid species whose development has not been described. This larva, like the one pictured above, is also propelled by two transverse ciliary bands, the anterior prototroch and posterior telotroch. There are several segments bearing developing chaetae (none protrude at this stage) between the two ciliary bands. The segment posterior to the telotroch, called pygidium is covered with short cilia. The two eyes are at the same level as the prototroch. The shiny marbles inside are the lipid droplets filling the cells of the gut. These lipid droplets are likely inherited from the egg, - i.e. this larva is likely non-feeding (lecithotrophic). See my other blog post about lecithotrophy vs. planktotrophy.

Crumrine, L.  2001.  Polychaeta. In: An Identification Guide to the Larval Marine Invertebrates of the Pacific Northwest.  Edited by Alan Shanks.  OSU Press, Corvallis.
Posted by Jonathan Gienger at 1:18 PM