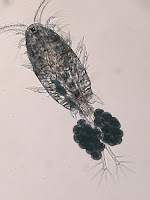 Copepoda, with approximately 12,000 described species, is one of largest taxa of crustaceans and a large contributor in most plankton samples. This is particularly true of calanoid copepods, as most species in this group live entirely planktonic lifestyles.  I collected the brooding calanoid copepod pictured here from a plankton sample taken in the Charleston boat basin. The anterior-most and longest appendages (first antennae) extend out of the frame of this picture. Some copepods release eggs into the plankton, but, as is the case here, many species carry their eggs in sacks attached to the abdomen. Note the two ovisacs laterally along the abdomen (the narrow posterior portion of the body) posterior to the thorax (the broad portion of the body) and anterior to the caudal ramus (the forked tail). 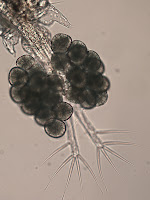 The second picture shows a close up view of the ovisacs. Inside the very thin transparent membrane of each ovisac (barely visible here) are 15-25 large eggs (each 70-80μm in diameter). The ovisacs are secreted by the epithelial cells lining the oviducts and are attached to the genital segment (the 6th thoracic segment fused to the 1st abdominal segment). Copepods in general are dioecious (meaning that they have separate sexes). During copulation males release spermatophores (sperm packages) and glue them to the female abdomen. Spermatozoa from the spermatophores then move into the female reproductive tracts and are stored there until they are needed. The eggs are fertilized internally on their way to the ovisacs where they will be brooded until they hatch as nauplii. 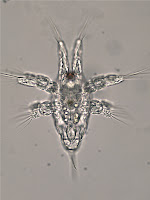 The nauplius larva pictured here hatched from just such a brood. It is about 270μm long. The nauplius hatches and swims using three pairs of head appendages: the first and second antennae, and the mandibles (from anterior to posterior respectively). The reddish blotch between the two first antennae is the naupliar eye. Copepod larvae go through six naupliar stages followed by five copepodid larval stages, molting between each stage. The mature adult no longer molts, and thus cannot grow.

Posted by Susanna DeBell at 8:56 AM