On February 4, 2013, I did a plankton tow off a dock in Charleston, OR and found a few embryos like the one pictured here. The embryo was about 180 microns across, and was surrounded by an inner chorion and an outer chorion about 360 microns in diameter. I kept the embryos, and after two days discovered that they turned into planuliform larvae, hatched from their chorions and were swimming around in the dish. 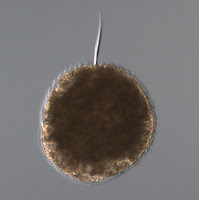 The planuliform larva is uniformly ciliated and has a prominent bundle of cilia called the apical tuft at the anterior end (12 o’clock on the second picture). Such larvae are found in nemerteans (phylum Nemertea, a.k.a. ribbon worms) from the orders Hoplonemertea and Palaeonemertea.

After a few more days these larvae developed features that allowed me to identify them as belonging to the order Hoplonemertea (e.g. several pairs of subepidermal eyes visible on the third picture). This picture shows an 11-day old individual. At this point they mostly crawled on the bottom of the dish, and had developed many of the adult structures, such as the brain and proboscis, so they can be considered juveniles rather than larvae. Hoplonemertean metamorphosis (the transition from planktonic larva to benthic juvenile) is inconspicuous. The transition from swimming to crawling is accompanied by changes in the epidermis. Apparently many hoplonemerteans replace the larval epidermis composed of large, ciliated, cleavage-arrested cells with intercalating smaller cells of the definitive epidermis (Maslakova and von Döhren, 2009).

To witness this epidermal transition, I fixed some of my specimens in paraformaldehyde (with a touch of gluteraldehyde) and stained them with fluorescent phalloidin to visualize the outlines of the epidermal cells using a confocal microscope. 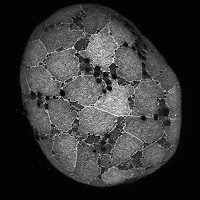 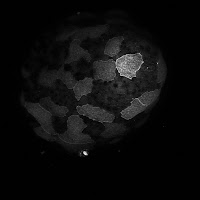 Posted by Kirstin Meyer-Kaiser at 2:41 PM